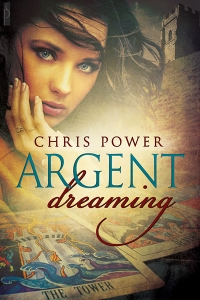 Mystical Glastonbury, troubled dreams and Tarot cards, a psychic gift she doesn’t want, and a tall, blond Frenchman who isn’t what he seems. Add in a murderer on the loose, and Caitlin’s long-postponed return to the sleepy country town will be a lot more exciting than she’d bargained for.
Available now from Silver Publishing

Below the British postage stamps, the address on the envelope was sparse, Lieutenant Leconte, Police Station, Vannes, Brittany, France. La Poste had not been kind to it, judging by the scuffs and creases. The letter it held had been scrawled in haste, the words slanting across the paper. Nor were they easy to read. Philippe Alexandre was reasonably fluent in English, be it written or spoken, which was one reason why it had ended up on his desk. But at first glance it threatened to defeat him.

“Go on,” Aristide said impatiently, “what does it say?”

“It’s about the Duliére murder.” He glanced at the end of the letter. “And signed by Samantha Collio—no, Collis. I remember that case. I’d just become a detective. It was my first murder and I was the lowliest one on the case. Eloise Duliére was beaten to death by her lover, and a little English girl found the body. Guillot still had his hands around Eloise’s throat.”

“He then ran off and disappeared from the face of the earth. Yes.” Aristide nodded. “Poor old Leconte would remember it too. One of the few loose ends he didn’t manage to tie up before he retired. So what has she to tell us, five years on?”

Philippe pushed a swathe of dark blond hair out of his eyes and scanned down the page, muttering the more troublesome words under his breath. Then said, “She says she thinks she’s seen Guillot.”

“Listen to this,” he said and translated the English into French. “Dear Lieutenant Leconte, I saw this man in the High Street and I’m sure it was Alain Guillot. He had long black hair and a scruffy beard and he was with a group of crusties but I’m certain it was him. I know it was a long time ago but after what had happened I don’t think I would ever forget what he looks like.”

“Crusties?” Aristide frowned, rolling the unfamiliar word on his tongue. “Are you sure that’s what it says? What are they?”

“No idea,” Philippe shrugged. “She’s written from an address in Glastonbury—Quest, The Courtyard, High Street. In England,” he added as Aristide’s expressive eyebrows climbed.

“Glastonbury? Never heard of it.”

“You must have. King Arthur and the Grail. They have nearly as many Arthurian links as we do in Brittany.”

“Not my scene. Well, by the look of it, it’s been dropped in your lap, my friend. What are you going to do? Fax a copy of Guillot’s photofit and get the local police to have a word with her?”

“Maybe, maybe not. I think I’d sooner talk to her myself. I was part of the team, though I doubt if she’ll remember me. She was only a child and frightened half out of her wits.”

“My friend,” Aristide said wryly, raking a glance up and down Philippe’s lean six foot frame. “You have the looks of a movie star and the ladies always remember you, whether they’re infants or grandmothers.”

Chris started creating stories not long after she mastered joined-up writing, somewhat to the bemusement of her parents and her English teachers. But she received plenty of encouragement. Her dad gave her an already old Everest typewriter when she was ten, and it was probably the best gift she'd ever received – until the inventions of the home-computer and the worldwide web. Chris's reading and writing interests range from historical, mystery, and paranormal, to science-fiction and fantasy. She refuses to be pigeon-holed and intends to uphold the long and honourable tradition of the Eccentric Brit to the best of her ability. In her spare time [hah!] she embroiders, quilts and knits. Over the years she has been a stable lad [briefly] in a local racing stable and stud, a part-time and unpaid amateur archaeologist, a civilian clerk at her local police station and a 15th century re-enactor. She lives in a small and ancient city in the south-west of the United Kingdom, sharing her usually chaotic home with an extended family, three dogs, a frilled Australian dragon [lizard] and sundry goldfish.
View all posts by Chris Power ~ Author →
This entry was posted in Argent Dreaming, Silver Publishing, Writing and tagged Argent Dreaming, Silver Publishing, Writing. Bookmark the permalink.